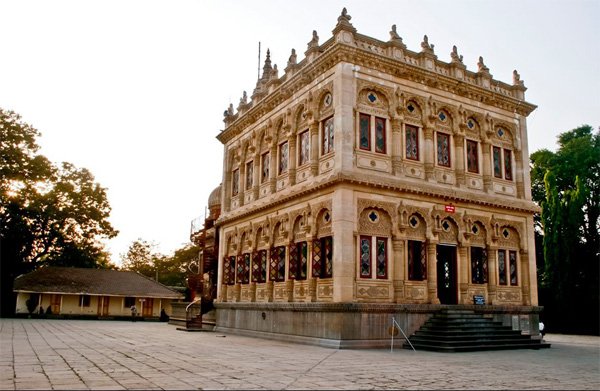 Considered one of the most popular historical attractions of Pune, Shinde Chhatri is a memorial devoted to Mahadji Shinde, a warrior who was the commander-in-chief during the Peshwa rule of the Maratha Empire from 1760 to 1780. Situated in the Wanowrie area of Pune, the complex of this memorial only housed a temple of Lord Shiva till 1965. It was Mahadji Shinde himself who constructed this temple in 1794. However, he breathed his last the same year after which his cremation took place in its premises.

It was Madhavrao Scindia who was mainly responsible for the development of this monument including the memorial. He erected the samadhi of Mahadji Shinde as a tribute to him at the place where his cremation took place. Built in 1965, the samadhi lies outside the Shiva temple of Shinde Chhatri. Mahadji Shinde is the ancestor of the Scindia family of Gwalior. The Scindia Devasthan Trust of Gwalior looks after this monument.

The picturesque architecture of this complex will enthrall you right from the start. It is a perfect blend of the Rajasthani style and the English style, which undoubtedly signifies a rich heritage of that time. The beautiful carvings and floral designs add to its grandeur. It is believed that the Shinde Chhatri was constructed as per the rules of Vaastu Shastra. The luster of the iron entrance gate still exists. Plus, the carvings and the idols of saints on the spire of the temple, made of yellow stone look very appealing along with the sacred room, constructed in black stone. The hall including its marble flooring  lamps, colorful window panes, and huge pillars look beautiful. You will come across a statue of Mahadji Shinde along with some photographs of members of Shinde (Scindia) family, which is the highlight of the monument. You will also find his umbrella that he always used to carry. It is said that the visitors are required to close their umbrellas in the premises to pay homage to the great warrior, even if it is raining. Thus the overall beauty, architecture, and its historical significance make it worth visiting.

Although this monument was properly built, it suffered a lot as it went unnoticed for many years. The rain water and moisture had spoiled the upper storey of the building, turning it grayish. Even the carvings and other structures were severely damaged. However, things are getting better with time due to its restoration to its actual looks. It is said that the pressure machines were used in cleaning up the moss from the porous yellow stones and water repellent roof was reconstructed. Thus the monument has been restored to a great extent and the development is still going on.

The Shinde Chhatri remains open from 6:00 a.m. to 9:00 p.m.everyday. Reaching this place is not a problem due to the availability of the bus service. Hiring a rickshaw is also a good option. You can opt for the Pune Darshan trip that includes this place in its list. Thus if you are looking ahead to come to Pune, you must visit this place to sense its magnificence.