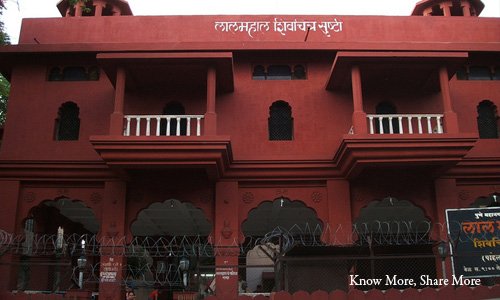 The Lal Mahal is a red-colored palace that shares an intense connection with the great Chhatrapati Shivaji Maharaj, the founder of the Maratha Empire. Located in the Kasbapeth area of Pune, it is one of the most popular monuments in India. Shivaji Raje’s father Shahaji Bhosale established this palace for his wife Jijabai and son in the early 1630s. The Lal Mahal that you see today is the reconstructed version of the original palace.

The idea behind the construction of the original Lal Mahal was to revitalize the recently destroyed city of Pune at the time when Dadaji Kondev, Shivaji and her mother, Jijabai entered the city. Shivaji was brought up in this palace and stayed there till he achieved his first victorious feat of capturing the Torna fort in 1645. This is the palace where Shivaji married Saibai, his first wife. Later, due to various attacks on the city, it fell into ruins and was ultimately destroyed towards the end of the 17th century. It is believed that some soil and stones of this palace were utilized for luck in the construction of the Shaniwarwada. Later, some houses were built on the land of that palace and were used by Ranoji Shinde and Ramchandraji. The records clearly state that the feasts were arranged for the Brahmins in the palace on the occasion of thread-ceremony of Sadoba, son of Chimajiappa. The present-day Lal Mahal was built by the PMC from 1984 to 1988. The location of the present palace is close to that of Shaniwarwada alike original palace.

The main encounter that took place in Lal Mahal that still remains fresh in our mind was that between Shivaji and Shaiste Khan. The Mughal Emperor Aurangzeb sent Shaiste Khan to invade Maharashtra. Shaiste Khan along with his soldiers harassed several innocent people, destroyed temples, and eventually took hold of Lal Mahal. Shaiste Khan tried his best to defile all the chambers in the palace. Meanwhile, Shivaji and few of his soldiers strategically and unexpectedly entered the palace. Shivaji was unable to kill Shaiste Khan as he managed to escape. However, Shivaji was successful in cutting off his fingers when he was attempting to escape from the window of the palace. Aurangzeb was so shocked and disappointed by this episode that he transferred Shaiste Khan toBengal.

The present-day Lal Mahal is more of a museum that has a vast collection of huge oil-paintings that depicts significant life events of Shivaji Maharaj. This includes a statue of Rajmata Jijabai, a big map of Maharashtra highlighting the forts of Shivaji, and a sculpture portraying little Shivaji holding a gold plough together with Jijabai and Dadaji Kondev. All these things, events, and the architecture of the Lal Mahal remind us of the glory and bravery of Shivaji Maharaj.

You can use the bus transport facility or hire a rickshaw to reach there. The palace remains open from 9:00 am to 1:00 pm and 4:00 pm to 8:00 pm. Thus make a visit to the Lal Mahal to feel its grandeur. 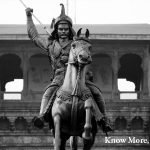